The eruption of the Cumbre Vieja volcano on La Palma is leaving more than shocking images of how the lava engulfs the houses in the area as it passes, some in a few minutes. The magma, which has already destroyed more than 160 homes, is heading into the sea, also destroying crops and farms. 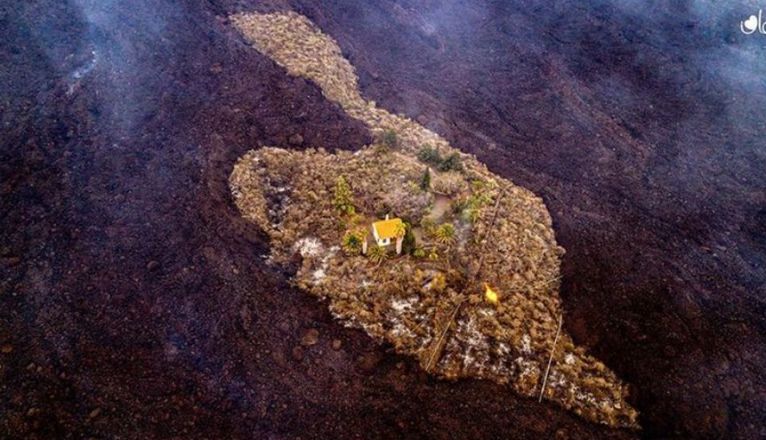 Although there is always a place for hope. Despite the suffering and uncertainty of dozens of families on the island, photographer Alfonso Escalero has managed to immortalize an image that is going viral on social networks. That of a house that is saved in extremis from being devoured by lava in the Paraíso area.

"In principle there should be no eruptions in Lanzarote, but I would not dare to say that it is very difficult for them to occur . "This is how the Geopark technical manager, Elena Mateo, has responded to the question that may arise on other islands after seeing the situation La Palma is experiencing, with the eruption of the volcano in Cumbre Vieja.

As she explains, the type of volcanism in Lanzarote "may be similar" to that of La Palma due to "the type of larva", but the main difference is in the age of each island, which makes an eruption less likely here. "Lanzarote and Fuerteventura are the oldest and what predominates are the phenomena of erosion and wear, not growing," he emphasizes.

However, she insists that although it is "quite unlikely", no scenario can be ruled out. In fact, remember that the last eruption in Lanzarote was in 1824 and that already "in theory should not have occurred", due to the age that the island was then . "It was the exception," she points out, reiterating that it cannot be completely ruled out that there is another. And it is that it underlines that since then "only 200 years" have passed, that "in terms of geological history it is not a long time." "It is still easier to answer that question on La Gomera, because there is no record of eruptions in thousands of years," he adds.

However, she does emphasize that currently in Lanzarote "there is no kind of sign that there is anything imminent in the short or long term", although she also recognizes the "difficulty in predicting this type of phenomenon". In the case of La Palma, the signals began to be detected only eight days before the volcano erupted.