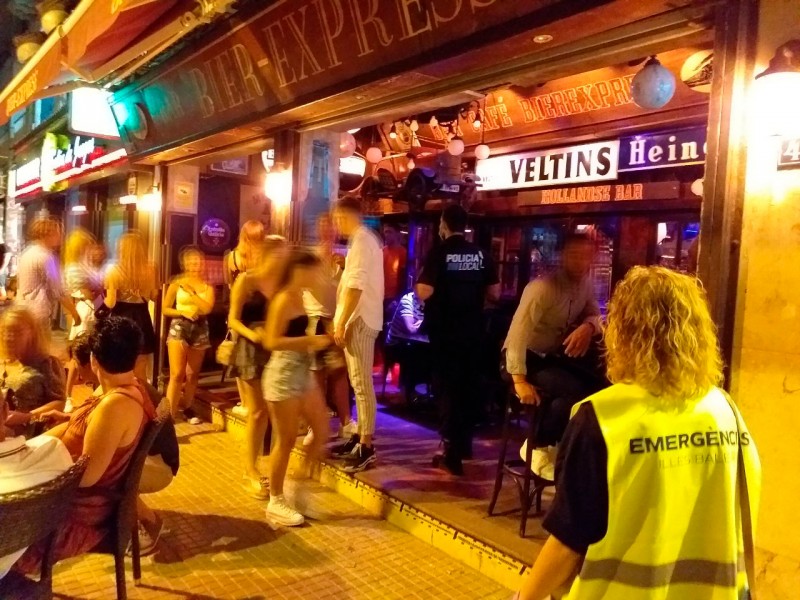 The regional Government of the Balearic Islands has announced its decision to close the streets of calle Miquel Pellisa and Pare Bartomeu Salvá in El Arenal and calle Punta Ballena in Magaluf after widespread condemnation of images showing drunken Brits (and drunken Spaniards and drunks of other nationlaities but mainly Brits and Spaniards to be fair) breaching social distancing guidelines and failing to wear masks in the street in breach of Spain-wide Covid restrictions.

The images, which were widely shared on social and mainstream media, have provoked scathing criticism from not only Spaniards but also British nationals, many of whom expressed shame and anger on social media after the British media showed photos and video of one incident in which chanting and cheering Brits jumped on a Mercedes reportedly causing 2,000 euros of damage.

The Balearic Government has published a resolution closing the above mentioned streets and prohibiting the use of any drinking glasses larger than half a litre, as well as the “pajitas largas ” which encourage shared drinking.

The “Ley de Excesos” also prohibits the use of high tables and bar stools as these “encourage clients to stand, rather than sit at tables, and not respect the social distancing regulations”. From now on, bars will be obliged to install lower tables “at which clients can sit” (and behave themselves).

“Our tourism activity also depends on our image”, said Iago Negueruela, Minister for Tourism and Employment, “and we ask our tourists to respect the measures established by our Government”.

“If tourists are not prepared to obey these rules then we ask them not to come to our islands. We don’t want uncivil holidaymakers here. We passed an ‘anti-trash tourism’ decree at the start of the year to tell them not to come and not to misbehave.”

“All commercial establishments, bars and restaurants in these streets will have to close today. We are not going to tolerate the type of images we have been seeing over the last few days.”

At the weekend the regional administration sent teams of inspectors into the principal tourism streets as part of a new initiative to ensure that tourists comply with the Covid legislation and minimise the risk of contagions for local workers and visitors on the islands as well as ensuring bars and restaurants working in the tourism sector also comply. Bars are obliged to maintain a limited capacity and display adequate signage warning visitors about the regulations, and also face stiff fines for non-compliance.

“Tourism at any price” is not an option for regional governments in Spain at the moment.