In the Aridane valley, on the western side of La Palma, lava flows devastate houses and banana plantations. This is catastrophic. Half of the area is affected ”, explains Miguel Rodríguez, one of the island's small banana producers who are still trying to assimilate the new reality. The eruption of the volcano in Cumbre Vieja fully threatens the housing and economy of La Palma . More than 50% of the island's GDP and 30% of its employment depends on a fruit to which 5,300 farmers are dedicated and which supports some 10,000 families, half in a territory of 84,000 inhabitants that now faces the roof shortage and economic ruin. 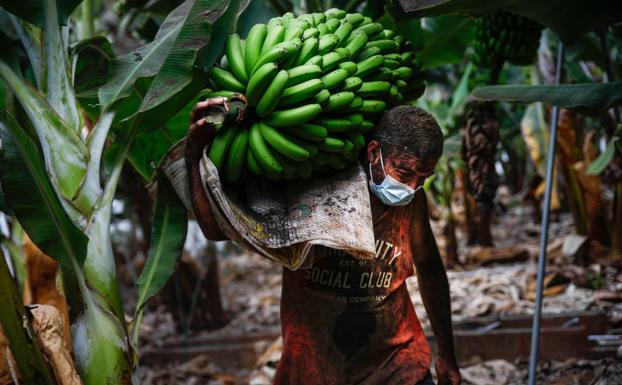 The Government of the Canary Islands announced yesterday that it is finalizing the purchase of 257 newly built homes, which are already finished or about to be completed on La Palma to accommodate hundreds of people there in the coming weeks. In addition, the insular Executive has acquired another 23 houses in El Paso and is contacting the owners of empty houses on the island. To this will be added another 150 homes from a dozen developments that could be ready by the end of this year or in 2022. For now, the evicted have been transferred to tourist accommodation and the Government of the Canary Islands is studying how to provide them with temporary housing until that can be installed in their final home. Among the options, it raises the installation of modules and prefabricated houses.

The houses and the livelihood of the banana trees are in the air. Unlike in the rest of the Canary Islands, the main economic engine of La Palma is not tourism, but agriculture, which here is based on bananas. The island produces 34% of all the bananas in the archipelago, only behind Tenerife (42%), but with a third of its extension. 150,000 tons of bananas leave palm plantations every year and the eruption threatens all of them in a thousand ways, now and in the future. "First there are the crops directly affected by the magma, but then there are the ashes, which are embedded in the buds and suffocate them," explains Hilario Batista, head of the agricultural association COAG in La Palma. “Also”, continues this farmer, “we have to think that the lava flows have broken the water infrastructures. You have to water once a week and since Sunday at 3:12 p.m., no plantation on the island has received a drop of water. And repairs to these infrastructures are going to take a long time. And as if that weren't enough, the roads are closed. For example, I have not been able to access my farm because there was 35 centimeters of ash on the ground, ”laments Batista.