UN envoy Philip Alston visited six communities in two weeks to learn about the reality of exclusion in Spain before issuing his report. The Canary Islands were excluded, one of the regions with the highest vulnerability rates. CANARIAS7 has asked several humanitarian associations what they would have said about the islands. 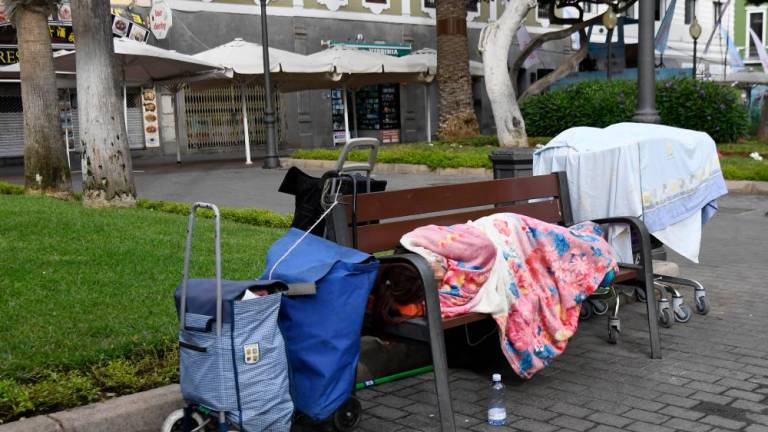 Image of a person sleeping on a bench in the Santa Catalina park, in the capital of Gran Canaria, this week. Next to her, all her belongings distributed in several shopping carts.

Caya Suárez, general secretary of Cáritas Diocesana de Canarias believes that he should have visited the islands to verify three realities: those of the homeless, the situation of people "who are asking for food in the streets" and how specific families in specific neighborhoods suffer from severe poverty. There are areas of the islands where "poverty has high rates," but one of the most worrisome issues, in his opinion, is homelessness. This situation, he warns, is increasing and affects not only single people but families. "Before it was not so noticeable for family support, but support networks no longer exist, so now there are more homeless families," he laments. In addition, he emphasizes that politicians only "cover the holes and they not go into the causes of poverty".

Jesús García, president of the Welfare and Development Social Work and member of the EAPN Canarias, which prepares the report of the Arope rate, recalls that there is no census of the homeless, a situation that is most visible in the capital of Gran Canaria. Many of these people, he adds, suffer from mental disorders "and are not adequately treated." They should go "once every five or six months" to the health center, for checks" In his opinion, from this policy they would have to initiate the necessary procedures to for those people who needed it and thus be able to give them help.

Another point that he would have liked to make to the UN reporter was to look at the elderly. Many of them, he says, have become "squatters" in some neighborhoods of Las Palmas de Gran Canaria, but are in "unfortunate" conditions.“There are day centers, but what do these people do at night? Where do you send them?"

Antonio Rico, president of the Red Cross, is clear about what Philip Alston should have visited in the Canary Islands. "They would have taken him to the slums, where we see the most structural poverty ." But also, he adds, he would have explained "that there are many people who have an employment contract and cannot meet their most basic needs."

Begoña Vera, an expert in equality, prostitution and trafficking and draws attention to one of the topics Philip Alston did not touch on his visit to Spain, being the third country in the world and the first in Europe to consume prostitution. In the Canary Islands a different reality would be found. It's like a very pretty carpet for the tourist, but when you pick it up, there is what we don't want to see. Vera, who recalls that prostitution is linked to situations of vulnerability, explains that if the "supply" does not cover the demand for tourism "they bring women from abroad." In fact, the Canary Islands are the route of trafficking in women for the sexual exploitation of prostitution mafias.